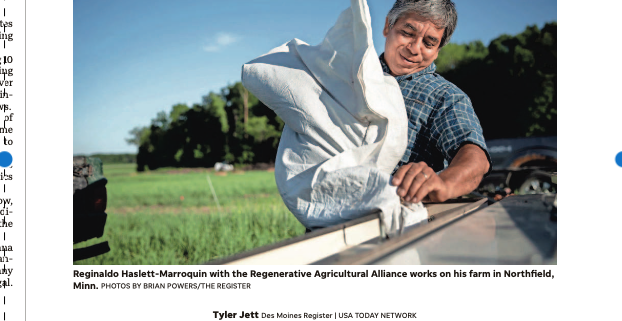 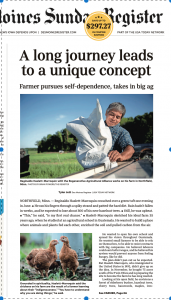 A recent story published in the Des Moines Register delves into the life and upcoming work of Reginaldo Haslett-Marroquin, a longtime friend and partner of the Regenerative Agriculture Foundation. Regi is the president of the Regenerative Agriculture Alliance, a Minnesota-based organization that creates partnerships throughout agricultural supply chains, with a focus on regenerative practices and ecosystem management.

The article, authored by Register reporter Tyler Jett, recounts Regi’s upbringing as the son of farmers in rural Guatemala during the country’s civil war. Inspired by his father, Regi went to an agricultural boarding school, where he became obsessed with agriculture. Though teachers at the school believed in maximizing the yield of a single crop, Regi continued to develop an interest in the farming of diverse crops that his father had found success with.

Many years and occupations later, Regi is realizing his dream of sustainable agriculture in the American Midwest, over a thousand miles from where it began. Regi has started a new organization called the Regenerative Poultry Cooperative, consisting of 22 farmers from Southern Minnesota and Iowa.

The cooperative will allow small chicken farmers to compete with corporate chicken farmers by sharing a new chicken processing plant in Stacyville, Iowa, where they expect to eventually process up to 1 million chickens a year. They are also incorporating Regi’s free-range chicken model, which entails raising chickens on natural diets in small forests. The birds raised by the farmers and processed in the new plant will be sold as “Tree Range Chicken” to stores and restaurants. The cooperative has also been given $250,000 by the Minnesota State Legislature to open a second processing plant in Albert Lea, Minnesota.

Regi is getting started on his own 75 acre farm in Southern Minnesota. He plans to raise 27,000 free-range broiler chickens along with 4,000 egg-laying hens. The farm will employ immigrants and teach them how to build their own farms. Inspired by the practices of his family in Guatemala, Regi has maintained a strong commitment to protecting sustainable farming practices.

“It’s about becoming Indigenous,” he told the Register. “We are all part of the earth.”

A special thanks to Desmond LaFave, a journalism student at Northeastern University, for summarizing this article.